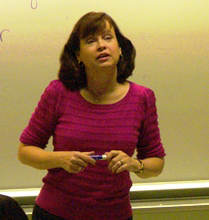 With over 20 years of experience as an attorney and business law professor, Nanci Carr has a masterful command of an impressive spectrum of legal disciplines ranging from entertainment to nuclear medicine.

Her entertainment and media law expertise commenced with her work as an executive at ABC Entertainment in Los Angeles where she negotiated and supervised the network’s agreements with large advertising agencies and progressed with her corporate and entertainment practice at Kinsella, Boesch, Fujikawa, & Towle where, among many other matters involving partnership agreements, stock and asset purchase agreements, software licenses, leases, employment agreements, securities filings, corporate governance, media production agreements and international distribution agreements, she represented a major hockey star in various commercial transactions including numerous personal endorsement contracts.

Her entertainment practice continued through her work at Sony Pictures Entertainment in the corporate and international legal department where she was involved in significant international transactions that included film financing arrangements, the acquisition of a 400 title Indian film library, co-production agreements as well as supervising the establishment of a representative office in China.

As a key part of her remarkably diverse legal career, Ms. Carr served for many years in the healthcare industry as Associate General Counsel for Syncor International Corporation, which was later acquired by Cardinal Health. Representing the nuclear pharmacy division in a variety of matters, Ms. Carr was responsible for and negotiated hundreds of transactions relating to or arising out of the sale, handling and transportation of radioactive isotopes used in noninvasive diagnostic procedures. On behalf of Syncor and later Cardinal, she also managed litigation matters, SEC and other regulatory filings, corporate governance, and the development of crisis communication plans.

She continues to repeatedly demonstrate her versatility in transactional substantive law while representing large teaching hospitals and a university medical school in matters extending from development and review of hospital policies to medical research and acquisitions of equipment and services.

She participated in the Tulane University Law School Program Abroad at Cambridge University, England, and the McGeorge School of Law Salzburg Institute, Austria, where she studied with Supreme Court Justice Anthony Kennedy.

Co-author:  When Does Compensation For "Time Spent Under The Employer's Control" Include Pre and Post Shift Waiting And Other Activities?, Southern Journal of Business and Ethics, (November 2014)